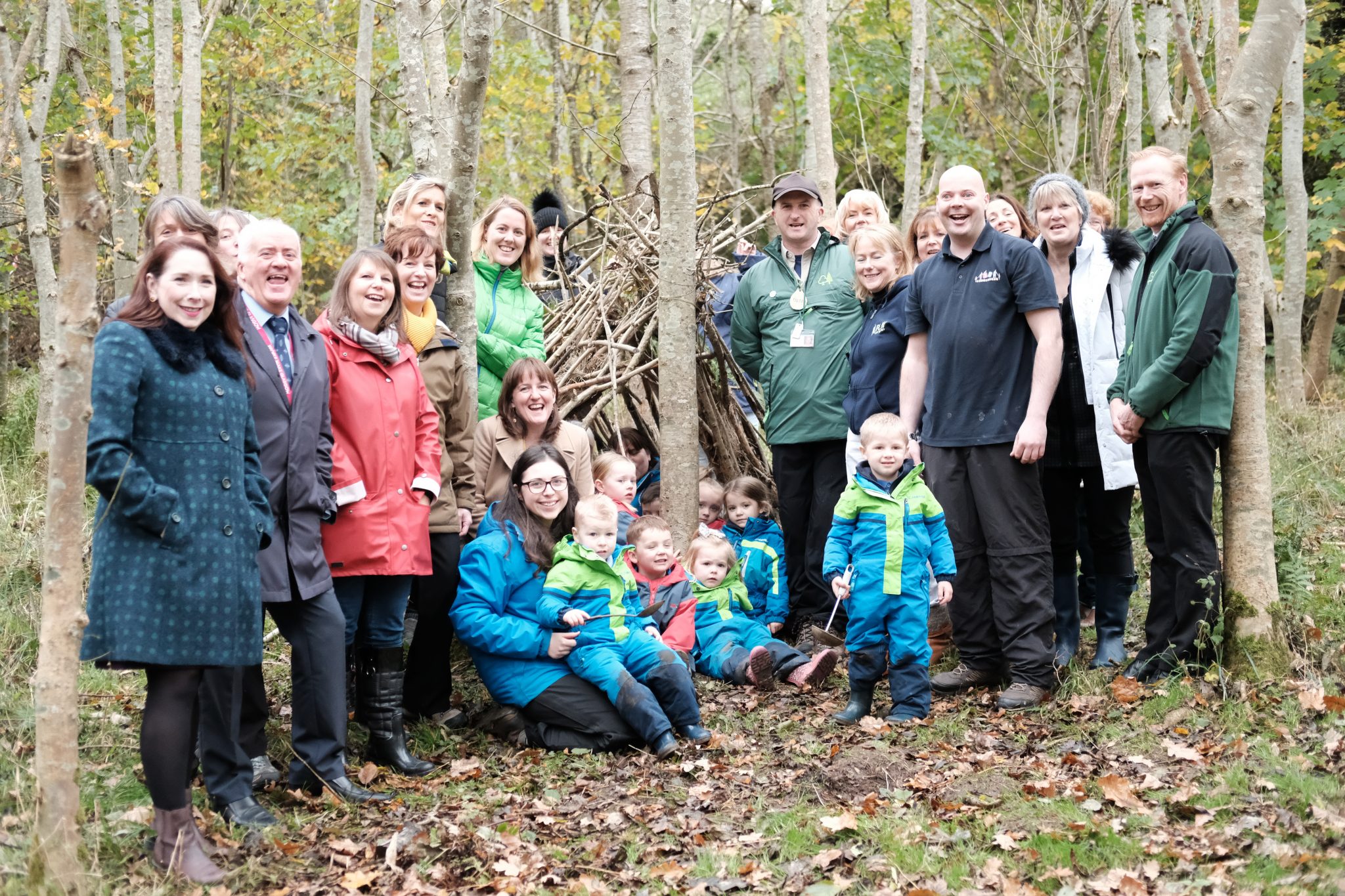 Playing and learning outdoors will be a fundamental part of growing up in Scotland, following a national commitment from 50 people and organisations across the country.

Alongside the Scottish Government and Inspiring Scotland, bodies as diverse as the Royal Zoological Society of Scotland and Glasgow Science Centre, as well as education groups, academics and NHS Health Scotland have signed up to a national Position Statement to make playing and learning outdoors an everyday activity for Scotlandâ€™s children and young people.

The Position Statement was officially launched by Childrenâ€™s Minister Maree Todd alongside Inspiring Scotland and representatives from health, education and the environment at the Muddy Buddies outdoor nursery in Drumchapel, which is run as a partnership between several local nurseries, Glasgow City Council and Inspiring Scotland.

The statement asserts the health, wellbeing and educational benefits of playing and learning outdoors and commits signatories to help widen access to natural and communal spaces and to enriching urban spaces for children and families to play in.

â€śWe know the benefits playing outdoors delivers for children in terms of improved health and wellbeing, building resilience and connecting with nature. Scotland has a wealth of great outdoor space, including in the heart of our cities, and the expansion of early learning and childcare provides us with an opportunity to increase the amount of time children spend playing in these wonderful spaces. Muddy Buddies is a perfect example of the collaborative working and commitment between partners that the position statement promotes, all delivering a high-quality outdoor experience for the children involved.â€ť

The Position Statement draws on the input and expertise of many of the signatories who met in the summer to form Scotlandâ€™s Outdoor Play and Learning Coalition.

The Coalition was created following a meeting organised by Inspiring Scotland early in the year to bring together leaders in government, health, education and the environment to address growing concerns about childhood health and wellbeing.

Inspiring Scotland has been working to promote and deliver outdoor play for children since 2010 and works in partnership with charities, local authorities and Scottish Government to deliver play in primary schools and communities. Earlier this year, Scottish Government announced funding for Inspiring Scotland to develop outdoor nurseries in eight local authorities as part of its expansion of free childcare hours.

â€śWe want all Scotland’s children to thrive and we believe passionately that being outdoors, being active, playing and having fun is one way we can do that. We know that outdoor play and play-based learning has great outcomes for children; improved physical activity leads to better health and wellbeing but play is also where children learn, make friends, share and cooperate, take risks, test boundaries, think creatively and problem-solve. There are also wider benefits for society – a generation of children that grow up, not just familiar with the outdoors but passionate about it, a generation that love and understand the world around them is a generation that will protect and care for it. If we want a future at all, we need that to be the case.â€ť

Research from around the world demonstrates the enormous benefits to childrenâ€™s health, wellbeing and development of getting outside to play and the right to play is enshrined in United Nation Convention on the Rights of the Child.

Catherine Calderwood, Chief Medical Officer for Scotland, and a signatory to the statement said:

â€śWe know the benefits of outdoor learning, exercise and play for young children in terms of their health and wellbeing and their physical and cognitive development. Playing, learning and having fun outdoors helps to improve wellbeing and resilience, increase health through physical activity and allows children to use the natural world to help develop curiosity and science skills.â€ť

Peter Higgins, Professor of Outdoor and Environmental Education, Moray House School of Education, University of Edinburgh, and a signatory to the statement, said:

â€śThere is a reason parents take their babies and toddlers outdoors to play, and children and adults of all ages continue to seek out local greenspaces, the countryside, seashores and wild land â€“ it satisfies a deep need within us and is fundamental to our wellbeing. Scotlandâ€™s progressive approach to outdoor play and nursery provision, especially if developed through further provision in formal education, will bring lasting dividends in health, wellbeing and learning, and even our national identity.â€ť

â€śGlasgow has for many years advocated the benefits of outdoor play in our schools and early yearsâ€™ settings. Our children are actively encouraged to play outdoors â€“ whatever the weather â€“ and the children and staff love the learning opportunities this offers. We are delighted to join partners and stakeholders to endorse this positioning statement.â€ť

â€śAt Early Years Scotland we are absolutely delighted about the huge shift that is taking place in relation to more and more outdoor nursery provision! High quality outdoor Early Learning and Childcare has so many benefits for our young children, including physical activity, fresh air, space, nature and an enhanced sense of freedom and happiness. Being outdoors also supports endless opportunities for challenge and risk, and has such a positive impact on childrenâ€™s well-being, as well as nurturing a love of the environment from the earliest years. If only such opportunities had been available when my three daughters were little!â€ť

Blog 2 Read on as we share Blog 2 in our blog series on bringing Outdoor ELC to the Botanics in Edinburgh. This week’s blog contributor is Cath Ashby part of the learning team at the Royal Botanic Gardens Edinburgh. Hi I am Cath Ashby and I have worked at the Botanics for 23 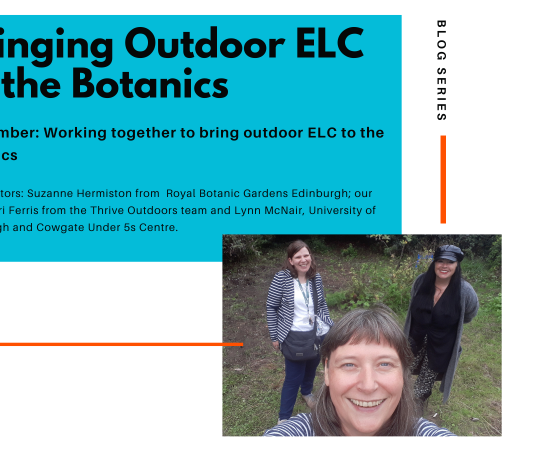 Blog 1 This week sees the start of an exciting collaboration between the Royal Botanic Garden Edinburgh (RBGE), Inspiring Scotlandâ€™s Thrive Outdoors team, the University of Edinburgh and two Edinburgh-based Early Learning and Childcare settings; Edzell Nursery and Outdoor Nursery Edinburgh (ONE). Over the next six months the partners will undertake research as groups of 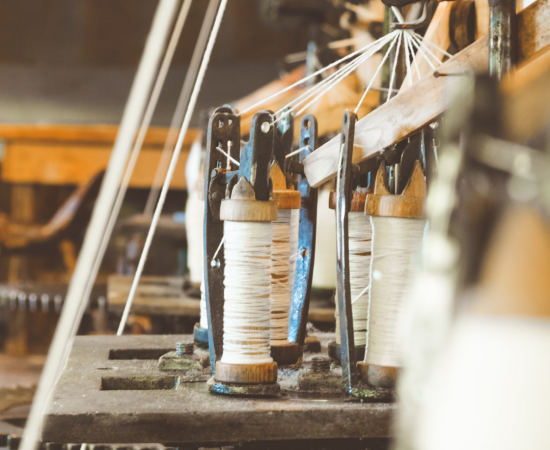 People living in Scotlandâ€™s island-based communities will benefit from new funding for projects designed to support employment, community resilience and health and wellbeing. Through the ÂŁ2 million Island Communities Fund, 29 successful community groups and businesses across 23 islands have been awarded grants of up to ÂŁ150,000 each. Projects focus on developing sustainable economic activities